I took 1500+ photographs this evening of the Vaikuntha Ekadasi celebrations at the temple at Nanguneri. This does not include the 500+ photographs I took this AM! I am MAD. 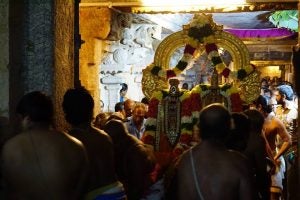 I was told that there 5000 people squeezed into the temple–I simply don’t know how this was possible, but I felt and smelt every one of those 5000 people. 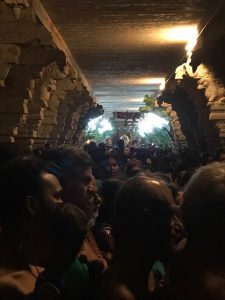 The atmosphere was electric, seething, anxious, filled with love. The air was humid and heavy, and sweat was pouring down my body in great rivers–my pores had become eyes. I thought then, that crying isn’t the only way to dissolve.

There are so many differences in the way that Nanguneri unfolds the opening of the Svarga Vasal. But one thing that struck me is the carefully calibrated waiting. At this temple, things move with an extraordinary, even brutal, efficiency. So, I expected that when the door opened, Vishnu and his dear consort would simply cross over. But no. They waited. And we waited, while the door was scented, blessed, adorned. Only then, after what seemed like an interminable wait, did the god who was a speck in the distance was suddenly so near you could breathe him in–all those flowers. Above the raucous sounds of the percussive tavil and the conch and the nagasvaram, the chant of Govinda, Govinda, Govinda filled the air, bounced off the stone pillars, and just hung in the air, an endless echo. Antati.

Ramanuja and Tirumankai (Nammalvar) were waiting on the other side to greet him–their faces looked so happy, delighted. I imagine that the devotees gathered wore similar expressions of joyful, joyous expectations. 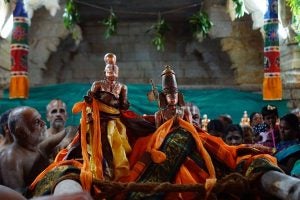 One cannot divorce these affective and experiential things, the careful choreography that maximizes impact, and ignites feeling, liquid and dynamic from the festival itself. This is what gives texture and depth when it culminates in the resonant recitation of the first hundred of the Tiruvaymoli. Word, sound, image, feeling–an endless loop–an antati of bodies of devotion.

I particularly like this image, which frames the processing gods with two expressions of donative piety–there, in the foreground, is the portrait of some anonymous donor, palms pressed together, his face that of a joyous supplicant. In the background, a wall of inscriptions, a cascade of donations and directives, breathing life into the temple, into its people, into its gods. 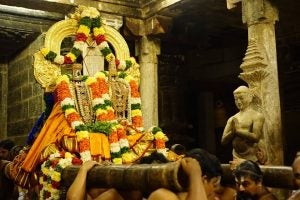 PS. At an event like this, it is impossible to take a photograph without a cellphone in the frame.