Day 2 of Ira Pattu. I adored the recitation of the last decad of the 2nd Hundred–Kilar Oli Ilamai–so haunting and slow as befits this really important decad, on Tirumaliruncolai, the first on any single site in the Tiruvaymoli. 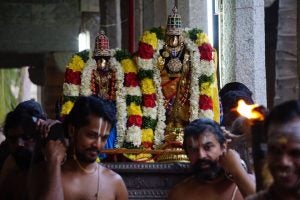 The crowds had thinned considerably today when the Vaikuntha Vasal opened. But still, there were quite a few people rushing through. I didn’t choose my position very well today, which is itself instructive about sight-lines, space, who goes where, and time, what can you see, when do you see.

Today, I was particularly delighted to capture the photograph of Devanayakan and Varamangai in the mirror as they processed through the corridor. Through many years of trying to get similar photographs at various temples, I have always failed. But today, I somehow managed it. What is it about this mirror-seeing that so excites people? I’ve seen this sevai so many times–but it never struck me quite in this way until just a couple of days ago. There’s something about the context of this Sevai (i.e. Vaikuntha Ekadasi and the 9 days after) that makes the whole idea of reflection and looking fascinating to me. Also, there are mirrors in other contexts as well–during processions when a mirror is placed in front of the deity; during the sodasa-upacaras, when a mirror is shown to the deity–and so on. But yes, there is something magical about it–and not just for a child. I think it has to do with the magic and allure of mirrors themselves. 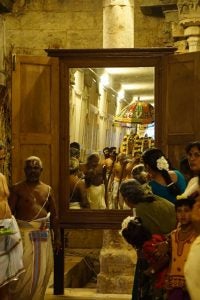 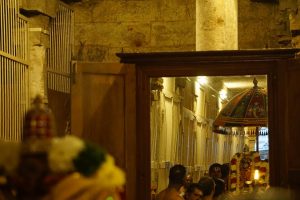 Even as Vishnu processes towards them, all eyes are on the mirror to catch a glimpse of him in it. This is meaningful, I know, because of all the ways that seeing (just as much as hearing) is crucial to the Adhyayanotsavam. Not just us seeing god as he makes his descent, but god seeing himself, to know himself. In other temples, when Vishnu returns in procession in the evening during Pakal Pattu, there is a mirror placed before him, so he can see himself–to see is to know. In Nanguneri, there is no mirror in the palanquin. Instead, the goddess, Varamangai, sits hidden looking at Devanayagan. To look is to know. 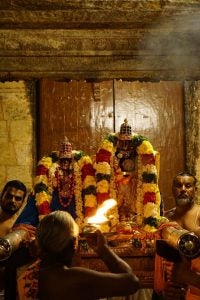 All photographs taken in public spaces during public processions with the permission of the temple authorities.